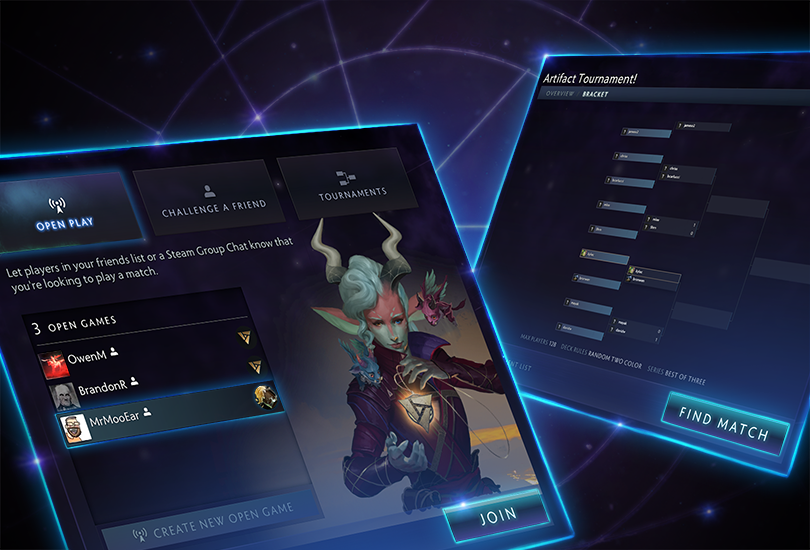 Artifact Features: Open Play and Tournaments
November 30, 2018
We've had an exciting few days watching everyone finally get their hands on Artifact. Alongside the strategic depth it's also been great seeing people explore the many modes of play. One of our goals in building Artifact was to capture some of the social energy and fun of playing games around the kitchen table with friends, and to bring those experiences online.

Today we want to do a guided tour of some features that bring us closer to that goal: matchmaking through Steam Group Chats and user-hosted tournaments.

Players and groups have a huge variety of differing goals and play styles. Some like low-stress games with all-commons decks, others want to competitively experiment with new archetypes. Some social circles are small and play games at specific times, while others are large and constantly have a few games going, and everything in between. 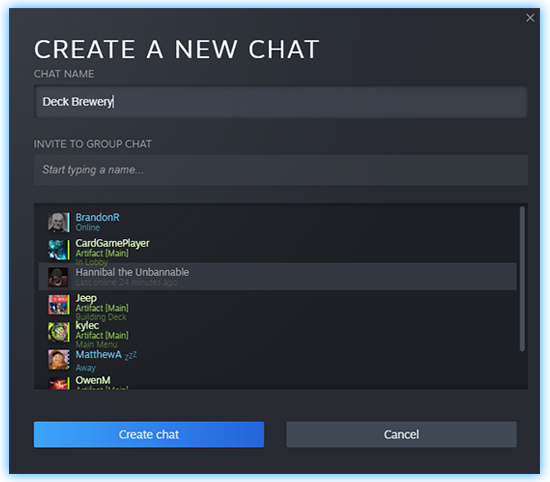 Steam Group Chats are an existing tool to help provide an online presence for these groups. Anyone on Steam can create a new Group Chat, and each supports text and voice, auto-linked giphy images, and now with the addition of Open Play, every group chat also supports matchmaking. By selecting Open Play from within Artifact, you can issue an open challenge to any group you're a member of. You can use your existing social groups to find the games you want to play with the opponents you want to play against. 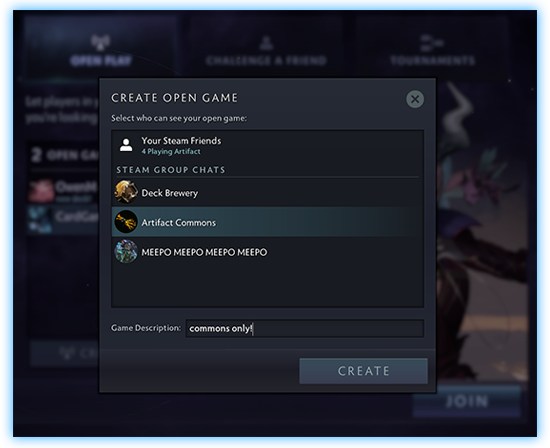 Creating an open game is as simple as selecting the group chat you want to find an opponent in. When you select a group, everyone in that group will get notified that you're looking for a game both through the chat window on Steam as well as in the Artifact interface. 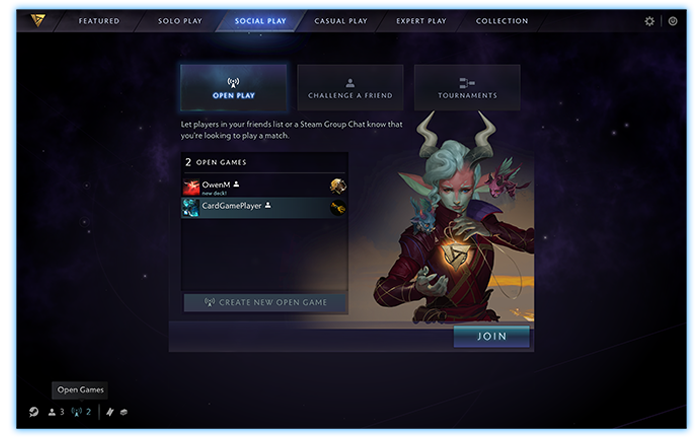 Once another player accepts your challenge, you'll automatically be placed in a lobby together. All you have to do is select your decks and play.

Creating a new Steam Group Chat is as easy as selecting a friend and inviting them through the Steam friends panel. If you're running a website or streaming, you can easily create a group that's wider than just your immediate friends by creating a public invitation link that you can use in an email thread, a forum, or a chat room.

Open Play games are about quickly finding a social opponent for a specific style of play. Artifact also supports group play with more structure through the in-game tournament system.

Any player can create any number of tournaments.

The definition of "tournament" is pretty broad. Artifact supports traditional single-day single-elimination brackets, but it's also possible to create an event that works more like a league, with players playing whenever they're available over the course of days or weeks.

If your group wants to draft all day every day, you can create that event. If you want to create the Tuesday Triathlon that starts with draft, moves through no-rares constructed, and ends with mandatory four-color decks, you can do that, too. 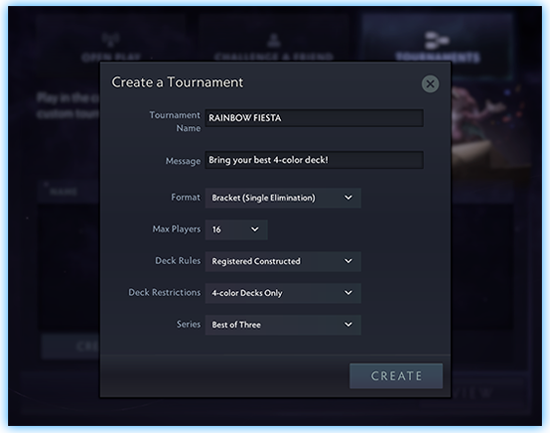 Once a tournament is configured and you've locked the structure, you can invite participants. You can either invite friends directly from inside the client or create a tournament invitation link that can be used anywhere. All participants in a tournament are automatically placed in a Steam Group Chat for that event.

When everyone is registered, all you have to do is push a button and the tournament will begin. The game will automatically advance through the tournament phases. When games are ready, players will get notifications, and status updates about match results and the overall tournament status will be posted in the tournament group chat. 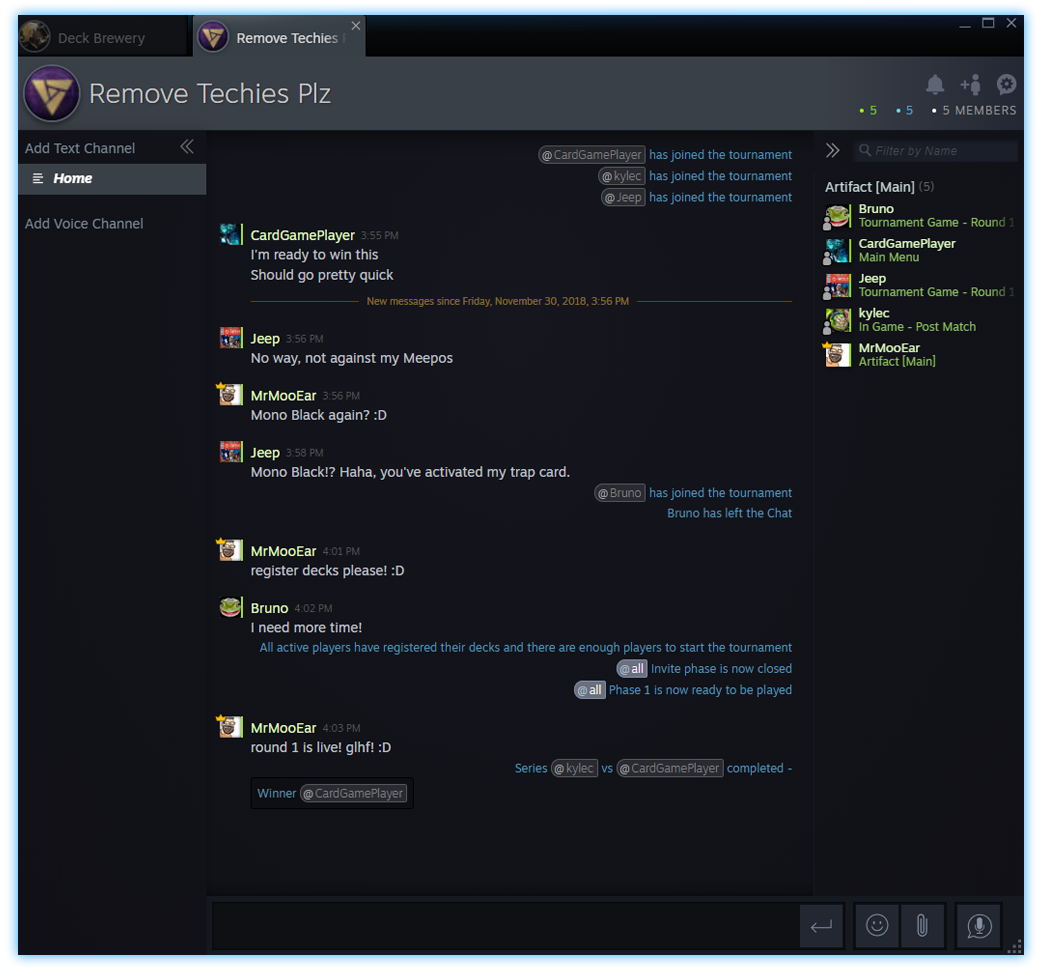